Clean energy was a hot topic in New York on Friday, when Gov. Andrew M. Cuomo announced a planned expansion of the NY Green Bank and a state agency released a report showing that clean energy jobs employed 146,000 New Yorkers by the end of last year.

Cuomo announced that the NY Green Bank is seeking to raise at least an additional $1 billion in private-sector funds to expand financing availability for clean energy projects. According to a press release, these additional funds raised from third-party investors will enable NY Green Bank to deliver even greater environmental and cost benefits to New Yorkers and broaden the scope of investable projects beyond the boundaries of the state.

“As the federal government turns its back on solutions to climate change while denying reality, New York is doubling down on our efforts to act on the clean energy future,” claimed Cuomo. “This expansion of the NY Green Bank will combat climate change while creating good-paying clean energy jobs across the state, helping to secure a cleaner and greener tomorrow for all New Yorkers.”

Because of its robust track record of driving nearly $1.4 billion in clean energy investment in the state, NY Green Bank has seen strong interest from third-party entities like pension funds and insurance companies seeking to utilize it as an investment vehicle for sustainable infrastructure projects, according to the release. The additional capital raised can be invested in projects across the U.S., expanding transaction scale and leverage, increasing the amount of clean energy that will be deployed for every dollar invested.

“Extreme weather has become the new normal. We must take action to protect our environment and ensure a more sustainable future through the use of clean energy,” said Lt. Gov. Kathy Hochul. “Governor Cuomo’s commitment to expand the NY Green Bank, the largest public-private clean energy finance entity of its kind in the nation, will ensure a cleaner, greener and more economically beneficial future for New York and create endless new career paths in clean energy.”

According to the release, NY Green Bank will also work with other states and philanthropic entities to help establish local Green Banks in other states. In support of these new Green Banks, NY Green Bank may provide financing along with mid- and back-office services, due diligence, underwriting and general technical support. As the next step in raising third-party capital, NY Green Bank will issue a request for proposals for advisory services to evaluate options for structuring and facilitating such an effort and ultimately assisting in securing third-party capital. The RFP is expected to be released by the end of the year.

Also on Friday, the New York State Energy Research and Development Authority (NYSERDA) released the 2017 Clean Energy Industry Report, which found that clean energy jobs employed 146,000 New Yorkers across the state at the end of 2016. The report said New York clean energy jobs outpaced the state’s overall employment growth, with such jobs expanding at a growth rate of 3.4% from December 2015 to December 2016. Furthermore, clean energy job growth is projected to continue its rapid expansion, with the report projecting growth to double again to 7% by year-end. 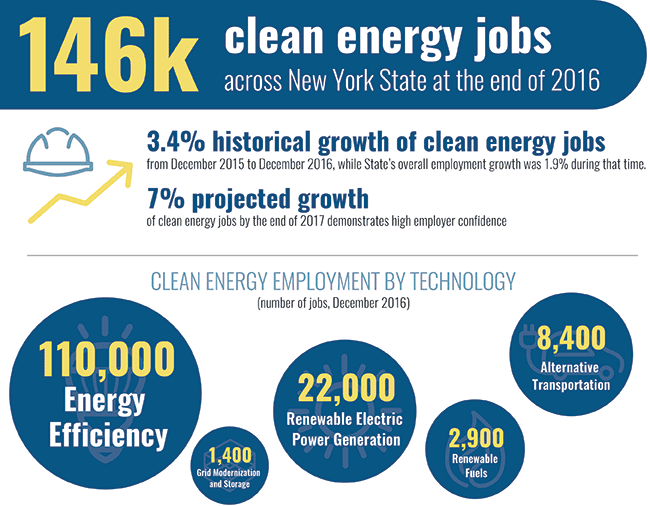 According to the press release, the Clean Energy Industry Report tracks and analyzes data on clean energy jobs, geographic distribution, and employer needs, and the newly reported numbers reflect the state’s progress in transitioning to a clean energy economy.

“Clean energy companies throughout New York are creating thousands of jobs and growing our economy faster than ever before,” said Alicia Barton, president and CEO of NYSERDA, in the release. “New York is proving that leading in the fight on climate change is a once-in-a-generation opportunity to create an entirely new home-grown industry, and the 2017 New York Clean Energy Industry Report released by NYSERDA today is further evidence that New York is capitalizing on this moment of opportunity.”

“Today’s announcements reflect the remarkable progress made on clean energy and climate under the leadership of Governor Cuomo,” added New York State Chairman of Energy and Finance Richard Kauffman. “In regards to NY Green Bank’s announcement, the opportunity to explore raising third-party capital will open up new opportunities to provide greater confidence to the marketplace, drive down costs, and lead to even greater scale.”

Further details of the Clean Energy Industry Report can be found here.

What is Community Solar?

Never miss updates on farming the sun, community solar and the latest in solar energy.

OYA Solar is committed to developing, building, and operating solar projects that provide clean energy and widespread economic benefits for communities and our customers.

With a project development pipeline of 1,000 megawatts, OYA Solar is proud to be contributing to a better future.

This website uses cookies to improve your experience while you navigate through the website. Out of these cookies, the cookies that are categorized as necessary are stored on your browser as they are essential for the working of basic functionalities of the website. We also use third-party cookies that help us analyze and understand how you use this website. These cookies will be stored in your browser only with your consent. You also have the option to opt-out of these cookies. But opting out of some of these cookies may have an effect on your browsing experience.
Necessary Always Enabled
Necessary cookies are absolutely essential for the website to function properly. This category only includes cookies that ensures basic functionalities and security features of the website. These cookies do not store any personal information.
Non-necessary
Any cookies that may not be particularly necessary for the website to function and is used specifically to collect user personal data via analytics, ads, other embedded contents are termed as non-necessary cookies. It is mandatory to procure user consent prior to running these cookies on your website.
SAVE & ACCEPT